Martha Stewart'S Favorite Crafts For Kids: 175 Projects For Kids Of All Ages To Create, Build, Design, Explore, And Share

Martha Stewart's Favorite Crafts for Kids focuses on craft projects that children, aged three to twelve, can make with their parents. These projects are fun, yet serve a practical purpose; children can wear, decorate, and play with what they make. Filled with ideas for a range of ages, skill levels, and interests, this book lets children's creativity run wild, while creating precious memories as parents and kids learn and create as a team. 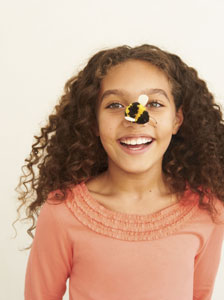 1. To make a pom-pom, open the two arms on one side of a pom-pom maker and start winding yarn at one end; go back and forth over the arms with the yarn until it is wrapped as densely as desired. Holding the pom-pom maker closed, use scissors to snip the yarn along the center of the rounded edges. Then cut a length of matching yarn or embroidery floss and tie the pom-pom in the center; pull tight and knot twice. Open the pom-pom makers arms, then carefully pull the two sides of the maker apart and off the pom-pom.

2. Make two pom-poms, one striped wit black and yellow, the other smaller and solid black.

3. To make stripes, wind one color around a portion of the pom-pom makers arm and cut yarn. Switch color and repeat for as many stripes as desired. Repeat process in reverse color order on other arm.

4. Trim any long or straggly yarn ends; if desired, trim the pom-poms further for a denser, smaller ball. Leave the yarn or floss you tied off with intact.

5. Cut a pair of freehand wings from white felt. For antennae, cut two lengths of heavy waxed thread, and knot at one end.

6. Use a long needle to attach the bees head to its body, pulling the embroidery floss used to tie it through the center of the body and back up again. (Alternatively, attach with fabric glue).

You can create your own pom-pom maker from two discs of cardboard, but manufactured versions, such as the ones by Clover, yield better results and save time.

Minecraft: The Complete Handbook Collection
On sale from $53.16
Sale
View